Saltford school has always been at the heart of the community. We enjoy sharing the school at social and other events, and participating in village life. We are also extremely grateful for the diverse contribution that many members of the community make towards the running of the school and the quality of our pupils' experience.

We highlight what's available in our local community on our Community notices page. This is for information only; it is not an endorsement.

Saltford School Parent Teacher Association (PTA) forms an important link between home and school. All parents/carers and friends of the school are automatically members of the PTA.

All members of the PTA volunteer their time to attend meetings and organise events and we are always looking for extra help and new ideas. If you would like to become involved in PTA activities, we would love to hear from you no matter how big or small a contribution you are able to make. See the PTA page for more information on who we are, what we do and how you can help!

We are very fortunate to have such a committed group of volunteers who, led by Chair Richard Rowland, give their time so freely to support the school and ensure we provide the best education possible for our children.

The school has always been at the centre of the local community. We strive to promote in our children a spirit of working and learning together and this is symbolised in our school logo. The seven leaves of the oak tree represent the school’s six golden rules and the link with the church while the three acorns reflect the partnership between the school, parents and child as well as the Holy Trinity.

See our Governors page for a full who's who, as well as links to the governing body's latest meeting minutes. Please see our meeting planner here for this academic year to give you an idea of what is covered in our meetings. If you would like to see what's involved in being a parent governor, please read our summary of the parent governor role here. To contact the governors, please email clerktogovernors@saltfordschool.org.uk.

You can find more information here about how our school governors work within the Futura Learning Partnership governance structure, including the Scheme of Delegation in the 'Statutory information' section.

All children who attend Saltford School are offered  wrap around care provision. This means they have access to supervised before and after school care at the Chuckles club. This is run by Tiddlers Day Nursery which is positioned right next to the school site. Children are accompanied to and from school every day. Tiddlers is also one of our feeder nurseries.

We are a feeder school for Wellsway School.

We are proud of our links with Bath Spa University and are committed to training the next generation of primary school teachers.

We believe that links between home and school are most important and that children progress best when school and home are working well together. We regard parents as essential partners in the life of the School. A questionnaire was sent to parents in July 2020. Please see the results here.  The latest survey was sent to parents/carers w/c June 2021 please use the link provided to complete.

With parent representatives from each class, the Parent Voice Group (PVG) is an important means of communication between school and families. See our PVG section here to see how it works, who your representative is and how you could become part of it.

We understand that families can be faced with many challenges during a child's time at school. For information about support available from external agencies please see our Support for parents page here.

The home/school agreement, which is signed by the Headteacher and parents, sets out the responsibilities of the school, parents and children in the educational process. This is a starting point for any discussions between parents and teacher and provides a broad framework within which the home/school relationship can work.

We publish a weekly newsletter on a Thursday to keep parents informed of school events. We try to give parents the opportunity to be fully involved in curriculum issues by holding regular curriculum sessions. We welcome any help that parents might be able to give in the classroom, under the direction of the teacher, and we always welcome the offer of specialist expertise.

Every Monday either the Rector or members of the ‘Open the Book’ team lead collective worship for the whole school.

The Rector, together with helpers from the church, have run some very successful prayer workshops for KS1 and KS2 children.

Church members organise and run an after school club, where children can find out about Bible stories, Christian festivals and beliefs in a fun and interactive way. They are also given refreshments. This activity is offered free of charge to any children who wish to attend.

Every year we hold three services in St Mary’s church. One for Foundation Stage and Key Stage 1, one for Lower KS2 and one for Upper KS2.

We talk to our children about careers that incorporate the subjects we teach – how we use those skills now and how we might use them in the future.  Our parents and local businesses support us with career related learning, including leading our assemblies. The aim of this is to boaden the children's horizons, raise aspirations and challenge any stereotypes.

See what's on in our local community

During December both the lighting of the Christmas tree at the village hall and the visiting of local residential homes to sing are key events in the school calendar.

The Bath & Wiltshire Parent magazine keeps in regular touch with us for coverage of the school's achievements and news.

Saltford Primary School has changed so much since its beginnings in the mid-nineteenth century that no-one would recognise our modern school as its descendant! The one thing that has remained constant is the school’s close links with St Mary’s church. 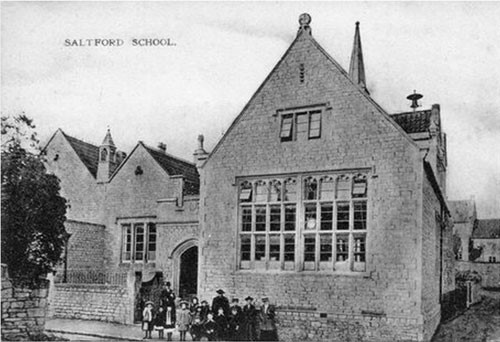 Originally known as Queen’s School (and held in what is now St Mary’s Church Hall) children of all ages were taught in  the same class, until numbers rose to 108 and a second class was built – what we would call a Key Stage One and Key Stage two class. The records show that attendance was less than full-time, especially at harvest time when the children were needed for jobs in the fields – which must have been just as well for the teachers’ sanity!

The early curriculum included spelling, arithmetic, geography and grammar. Reading books were provided but were doubtless full of moral tales. Biff, Chip and Kipper were unheard of! During the second world war, the playground was dug up and used for vegetable growing, and whole afternoons in September were spent collecting blackberries! 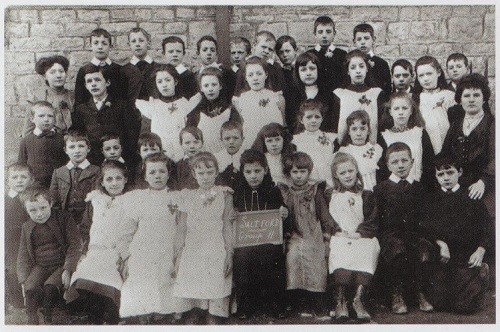 Photographs from the beginning of the twentieth century show a uniform of pinafores for girls and Eton collars for boys. Much later, the school had a blue uniform with a swan swimming on the Avon as its symbol. Now, we all enjoy the cheerful red uniforms with the tree emblem.

By 1960, the numbers attending did not fit the rooms and so Infants were bused to Ellsbridge House, whilst Juniors were taught in the existing building. During this time, most of the present school buildings in Claverton Road were erected, ready for the children in 1962.

You can see a further selection of old school photos in this PDF document and have a look at the wider history of Saltford, including pictures and notes about the school, in the Saltford Environment Group's online museum. 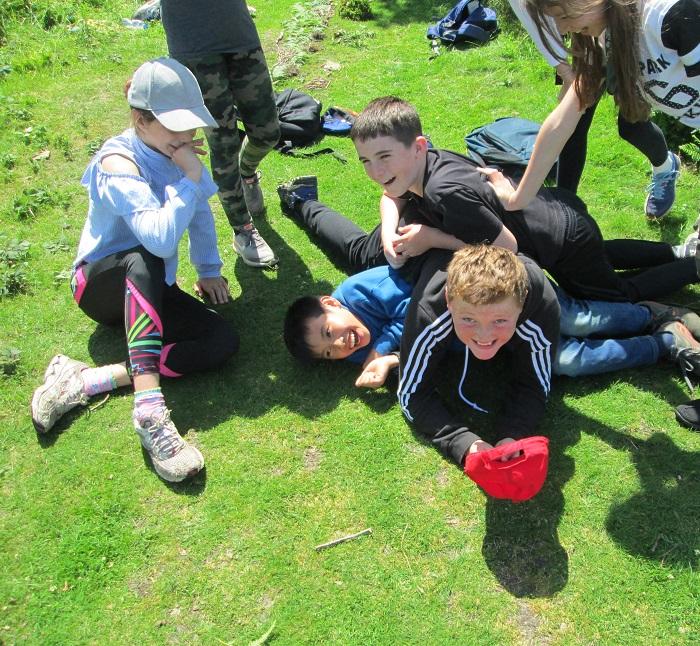 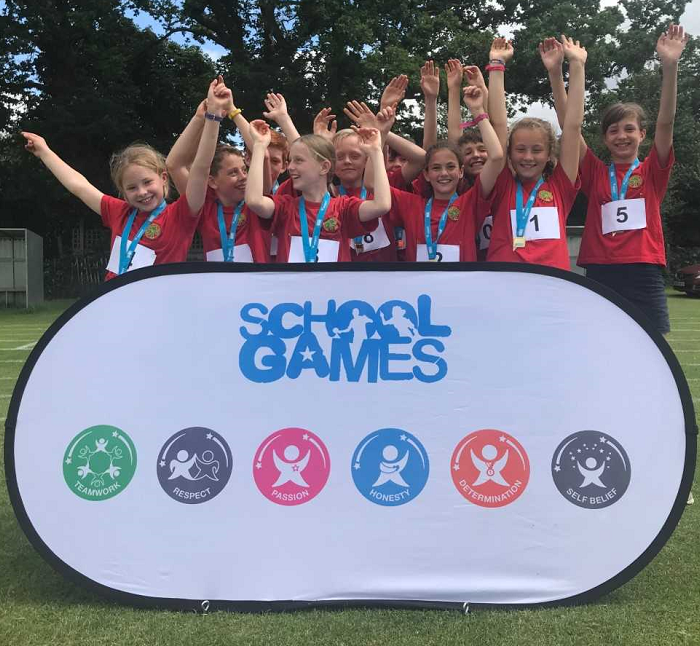 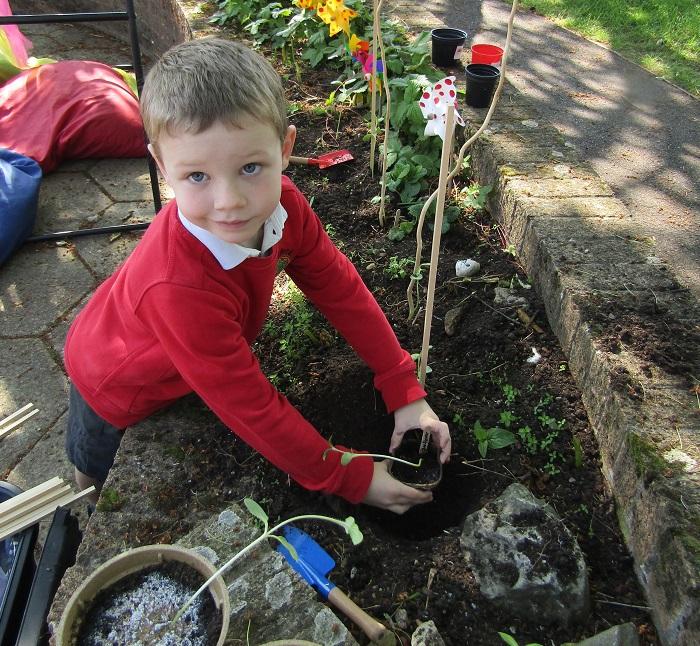